This capability is a suite of advanced spectroscopic techniques that can measure the spectral characteristics of both solid- and solution-state semiconductors, as well as the dynamics of excited state (excitons and charges) populations in these semiconductors. The methods cover a broad range of energies for probing various populations (ultraviolet to terahertz), as well as a broad range of time scales (femtosecond to millisecond for time-resolved measurements, as well as steady-state). Most measurements can be done over a broad range of temperatures, including cryogenic and elevated temperatures, and many can incorporate in-situ measurements under e.g., static or flowing gas environments, electrochemical bias, varying magnetic field, etc. The spectroscopic tools include in-situ Fourier transform infrared spectroscopy (FTIR), steady-state and time-resolved photoluminescence spectroscopy (PL and TRPL), and several advanced variants of pump-probe transient absorption and reflection spectroscopy (TA and TR).

These techniques, and the associated expertise at NREL, can provide detailed information on a number of important static and dynamic optical and electrical phenomena, including surface-bound intermediates in catalytic reactions, frequency-dependent conductivities, time-dependent dynamics (recombination, drift, diffusion, etc.) of excited state populations, magnitude and direction of built-in electric fields at interfaces, and the effect of various perturbations (temperature, magnetic field, ambient environment, etc.) on all of these phenomena. A brief overview of each capability is provided below.

An in-situ FTIR spectrometer can be used to measure the vibrational spectra of a variety of analytes, including those involved in catalytic transformations. The FTIR spectrometer is equipped with a diffuse reflectance (DRIFTS) accessory that can enable (1) high pressures (up to 40 bar) of ambient gases (e.g., H2, D2, others) over a sample of interest, (2) flowing of ambient gases and analytes over a sample of interest, and (3) modulation of temperature from 77 K up to 700 K. This allows for temperature-dependent catalytic surface reactions to be followed for a variety of species in either powder or thin-film form. The DRIFTS accessory also has an optical port that enables coupling of another excitation source (either broadband or laser, for example) to track the influence of photoexcitation on a catalytic reaction.

Steady-state and time resolved photoluminescence (TRPL) measurements can be performed, with excitation ranging from the UV to the near-infrared. Two-dimensional steady-state photoluminescence excitation mapping can be performed with emission detection ranging from 800 nm to 1700 nm using a home-built Fourier Transform NIR PL system. For TRPL measurements, two separate streak cameras are available for detection, one in the visible range (400–1,000 nm) and one in the near infrared (950–1,700 nm). These streak camera systems enable the simultaneous recording of the full PL spectrum and decay kinetics of the measured luminescence.

This is a highly sensitive technique for monitoring absorption of long-lived species in organic or inorganic samples with a detection range of 300–5,000 nm. The pump is a CW laser or lamp, which is modulated at variable kHz frequencies and overlapped in the sample with a probe (typically a tungsten lamp). The signal is routed to a lock-in amplifier that monitors the pump modulation frequency and enables sensitive detection, down to ΔT/T ≈ 10-6.

Four separate pump-probe setups allow characterization of photocarrier dynamics continuously from femtosecond to millisecond time scales in both transmission and reflection geometry. These instruments cover broad spectral ranges for both pump and probe pulses, with pump pulses covering the range from UV to near-infrared. The probe range depends on the experiment, and includes ultraviolet, visible, near-infrared, microwave (X band) and terahertz. Each of these setups can be utilized for operando spectroscopy, and each system can be used over a broad range of temperatures (typically 10 K to 400 K) by the use of a cryostat. Some of the important unique variations on this pump-probe spectroscopy include the following:

Systems can be broadly adapted and suitability must be determined on a case-by-case basis.

This capability has been broadly applied to the measurement of bulk semiconductors, nanoscale semiconductors, and semiconductor interfaces that are critical for effective photocatalytic reactions. Several unique aspects of the time-resolved experiments were designed to specifically enable the measurement of charge carrier yields, mobilities, and dynamics in the long-wavelength (microwave to terahertz) regime. These time-resolved measurements also span a very broad range of time scales, from femtoseconds to milliseconds. The in-situ DRIFTS measurement enables the tracking of surface-bound species during catalytic reactions over a broad range of external ambient environments and temperatures.

The facility is in use for a variety of NREL programs but can accommodate select additional projects. Use of custom, modified, and laser systems requires significant training by experienced personnel and careful attention to laser safety protocols. Given the considerable time investment by NREL staff, salary support and/or long-term collaborative partnerships are required.

These techniques, and the associated expertise at NREL, can provide detailed information on a number of important static and dynamic optical and electrical phenomena, including surface-bound intermediates in catalytic reactions, frequency-dependent conductivities, time-dependent dynamics (recombination, drift, diffusion, etc.) of excited state populations, magnitude and direction of built-in electric fields at interfaces, and the effect of various perturbations (temperature, magnetic field, ambient environment, etc.) on all of these phenomena. 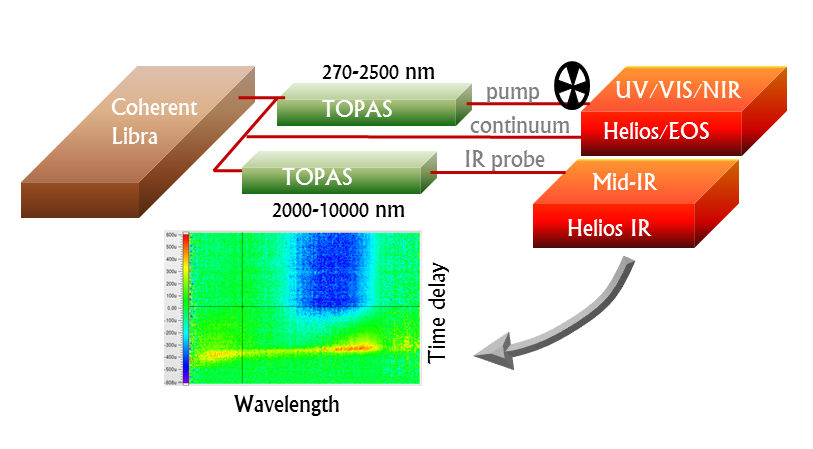 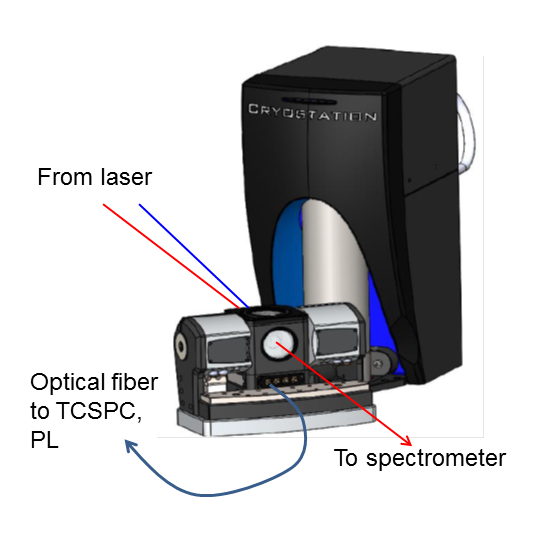 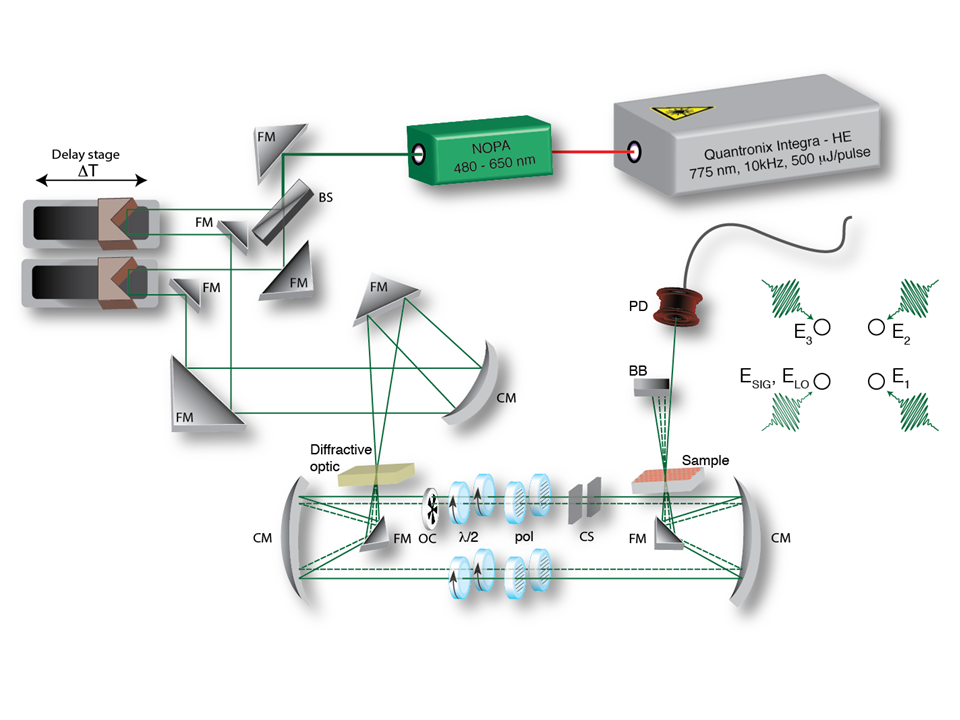 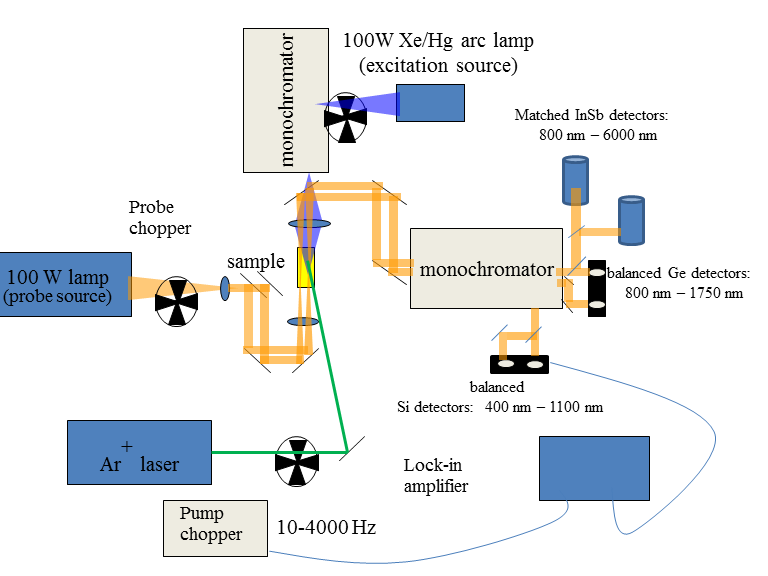 Steady-state photomodulation setup with tunable pump and probe sources and detections from 0.2 eV to 3 eV