The development of advanced electrocatalysts is a recognized capability at NREL. We have been working on producing extended surface catalysts for electrolysis applications since 2012. We have demonstrated these capabilities in the development of:

NREL’s catalyst synthesis capabilities include a variety of approaches, including spontaneous galvanic displacement, direct deposition, atomic layer deposition, and chemical vapor deposition. NREL has demonstrated these capabilities with PGMs including iridium-based (iridium-nickel, iridium-cobalt) nanowires and platinum-based (platinum-nickel, platinum-cobalt) nanowires and PGM-free catalysts including cobalt- and nickel-based nanomaterials and metal-organic frameworks. Each of these material classes has been studied in half- and single-cells and demonstrated significantly activity/performance enhancements compared to state-of-the-art (SOA) nanomaterials.

In addition to materials and components synthesis, NREL has the capability to characterize materials ex-situ, and has been working on electrolysis performance and durability standardization with electrolysis stakeholders since 2012. NREL has used a variety of electrochemical methods (hydrogen and metal underpotential deposition, carbon monoxide stripping, capacitance) to evaluate catalyst electrochemically active surface areas and site-specific activities. These capabilities have been demonstrated through SBIRs (Giner-PEM, PhMatter-AEM), an Incubator project (Giner, AEM), NREL-internal funds, and a variety of H2 @Scale and HydroGEN projects.

NREL has developed standardized testing protocols for evaluating oxygen evolution (PEM and AEM) and hydrogen evolution (AEM) performance and durability, and applied these methods to various catalysts. In half-cell testing, standard protocols (fixed potential and potential cycles) have been applied to probe catalyst durability and segregate loss mechanisms, including oxidation/passivation, dissolution, and aggregation. Ex-situ half-cell activity and durability were correlated to single-cell tests, and have been used as a predictor of kinetics and catalyst-related durability in the device.

NREL has further developed microelectrode capabilities to study catalyst-ionomer effects on OER and HER performance. These evaluations have included but are not limited to a variety of metals (platinum, iridium, ruthenium, cobalt, and nickel), ionomers (Nafion, NREL Gen2, Tokoyama AS4, ETFE), and test conditions (relative humidities, temperatures). NREL has the ability to leverage ongoing projects in electrolyzer and fuel cell membrane and ionomer development to study ionomer impacts with SOA and various novel materials. Through recognized capabilities in membrane electrode assembly (MEA) integration and single-cell testing, we have correlated microelectrode testing to MEA performance. The microelectrode studies undertaken at NREL employ conventional static microelectrode setups. For microelectrode measurements that would allow rapidly changing conditions, integrated mass spectroscopy, and (nanometer-scale) thin film measurements, see the complementary LBNL node: Microelectrode Testing of LTE Electrocatalysts, Ionomers, and their Interactions in the Solid State.

Inline capillary mass spectrometry (ThermoStar GSD320, Pfeiffer Vacuum, 1-300 amu) is also available through this capability node for the purpose of sampling gas streams near atmospheric pressure continuously (up to one data point per second) and in real-time. Analog mass/charge scans can be performed to identify unknown species by their mass/charge ratio, or the response of a known species can be monitored continuously over time and quantified when suitable calibration standards are used. For hydrogen and oxygen yield measurements, a NIST-traceable primary calibration gas standard and calibrated mass flow controllers are available. Other relevant calibration gas standards may be obtained as needed. For ex-situ catalyst characterization measurements, a custom, glass cell designed to flexibly accommodate various electrode geometries is available.

Also available is a scanning electrochemical microscope (SECM), an electroanalytical scanning probe tool that can be used to image substrate topography and local reactivity with high resolution. The SECM can be operated in several modes that make it a useful tool in a variety of applications. Some examples include:

We have produced materials by a variety of approaches, including spontaneous galvanic displacement, direct deposition, atomic layer deposition, and chemical vapor deposition, covering synthesis sizes from the small (mg) to large (g) scale.

NREL’s capabilities are unique in that no one else within the national lab system has developed electrocatalysts with both high surface area and site-specific activity. Futhermore, NREL is unique in its range of testing capabilities. Our electrocatalysts have produced activities significantly greater than state-of-the-art materials and any other catalyst reported to-date, within the national lab system or otherwise.

NREL has benchmarked electrolyzer and component performance and standardized testing and durability protocols for acidic OER, alkaline HER, and alkaline OER. This work has included domestic and international stakeholders, including Julich, Franhofer, Giner, and Proton Onsite. NREL also has a variety of existing catalyst and testing projects in electrolysis. NREL has organized, hosted, and lead electrolyzer workshops, organized and lead electrolyzer symposia at ECS Meetings, and lead an ECS focus issue entitled “Electrolysis for Increased Renewable Energy Penetration.”

The capability and demonstrated expertise are unique to NREL and not widely available. Availability can be made to external users, which is subject to use-limitations based on existing projects that require use of the aforementioned equipment. In general, however, the half-cell testing capabilities, including test stands, cells, and electrodes, are under-utilized and minimal limitations are expected to external users. 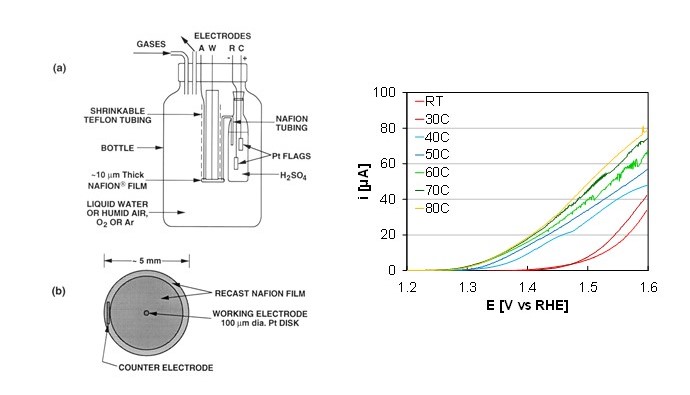