Electrolyzer research needs ex-situ and in-situ characterization of materials and devices, in addition to synthesis of novel advanced material sets. NREL operates an extensive in-situ characterization laboratory that is fully equipped with the infrastructure required for hydrogen research and development. The features of the laboratory include high bay ceilings, expansive laboratory ventilation (six air exchanges per hour), hydrogen safety sensors to monitor hydrogen levels in the laboratory, and a state-of-the-art hydrogen safety alarm system triggering safety actions for 10% and 15% lower flammability levels (LFL) in the room, respectively. In case of a hydrogen alarm, the laboratory is switched into a save mode by cutting power (i.e., triggering an emergency power off) and switching off the hazardous gases that are supplied to the laboratory.

In this environment, NREL operates a variety of PEM electrolyzer test systems that span from small scale single cell units, over medium size short stacks, to large scale stacks and systems. The power ranges of the units vary from below 1 W up to 250 kW. High pressure operation (i.e., pressurization of the hydrogen up to 30 and 50 bar at the backend of the electrolyzer cell/stack) is available at two select stations. Testing capabilities also include the operation of alkaline exchange membrane (AEM) systems that typically require handling of liquid alkaline solutions to improve cell performance. These unique electrolyzer testing capabilities are not available at other national labs.

A host of diagnostics is available for the in-situ characterization of electrolyzer cells/stacks. These include standard diagnostics such as single cell and stack performance evaluation, benchmarking of performance at specific operating conditions, AC impedance spectroscopy, cyclic voltammetry, linear sweep voltammetry, and limiting current diagnostics. Durability-related diagnostics may include accelerated stress tests (ASTs) such as load cycling, temperature cycling, and electrochemical cycling. One of NREL's systems was further customized to allow for electrochemical compression of hydrogen up to 50 bar, which is a research area of interest to the electrolyzer industry. This unique capability is enabled by the ability to switch the anode inlet of the electrolyzer to a hydrogen gas feed. Pressurization from an inlet pressure of 1–5 bar to an outlet pressure up to 50 bar is available. Advanced diagnostics may further include spatial analysis with a segmented cell.

Inline capillary mass spectrometry (ThermoStar GSD320, Pfeiffer Vacuum, 1-300 amu) is also available through this capability node for the purpose of sampling gas streams near atmospheric pressure continuously (up to one data point per second) and in real time. Analog mass/charge scans can be performed to identify unknown species by their mass/charge ratio, or the response of a known species can be monitored continuously over time and quantified when suitable calibration standards are used. For hydrogen and oxygen yield measurements, a NIST-traceable primary calibration gas standard and calibrated mass flow controllers are available. Other relevant calibration gas standards may be obtained as needed. As examples, hydrogen/oxygen cross-over could be quantified under various operating conditions or degradation reactions that produce vapor-phase species could be detected and monitored.

NREL's electrolyzer test systems are all limited to a specific set of operating conditions and cell and stack size. For any testing needs within the range of conditions listed above, the appropriate test system needs to be identified in collaboration with NREL researchers. NREL's spatial analysis system is currently not optimized for electrolyzer work. Additional development for spatial analysis would be required. The handling of alkaline solutions for AEM electrolysis cell operation is currently limited to 5M concentrations. Porous transport layer (PTL) materials used in electrolysis systems often require a coating to reduce contact resistance and increase durability. For degradation experiments (e.g., of catalyst layers), NREL uses internal coating capabilities to suppress all other cell degradation processes such as PTL and flow field corrosion or oxidation.

Laboratory facilities are specifically designed for hydrogen-related research in an environment featuring state-of-the-art hydrogen safety systems. NREL is the only national laboratory with electrolyzer test equipment and electrochemical compression capabilities. Extensive experience has been gained on renewable hydrogen projects during the past 13 years, including hydrogen from wind and solar. Recent experience includes successfully benchmarking performance on single cell electrolyzers with an acknowledged European research institute. A large range of electrolyzer test equipment (1 W–250 kW, single cell, stack and subsystems including pumps and hydrogen drying) and a host of analytical equipment are all suited for research and development on electrolyzer materials, devices, and systems.

The equipment is located in the ESIF user facility and currently available. 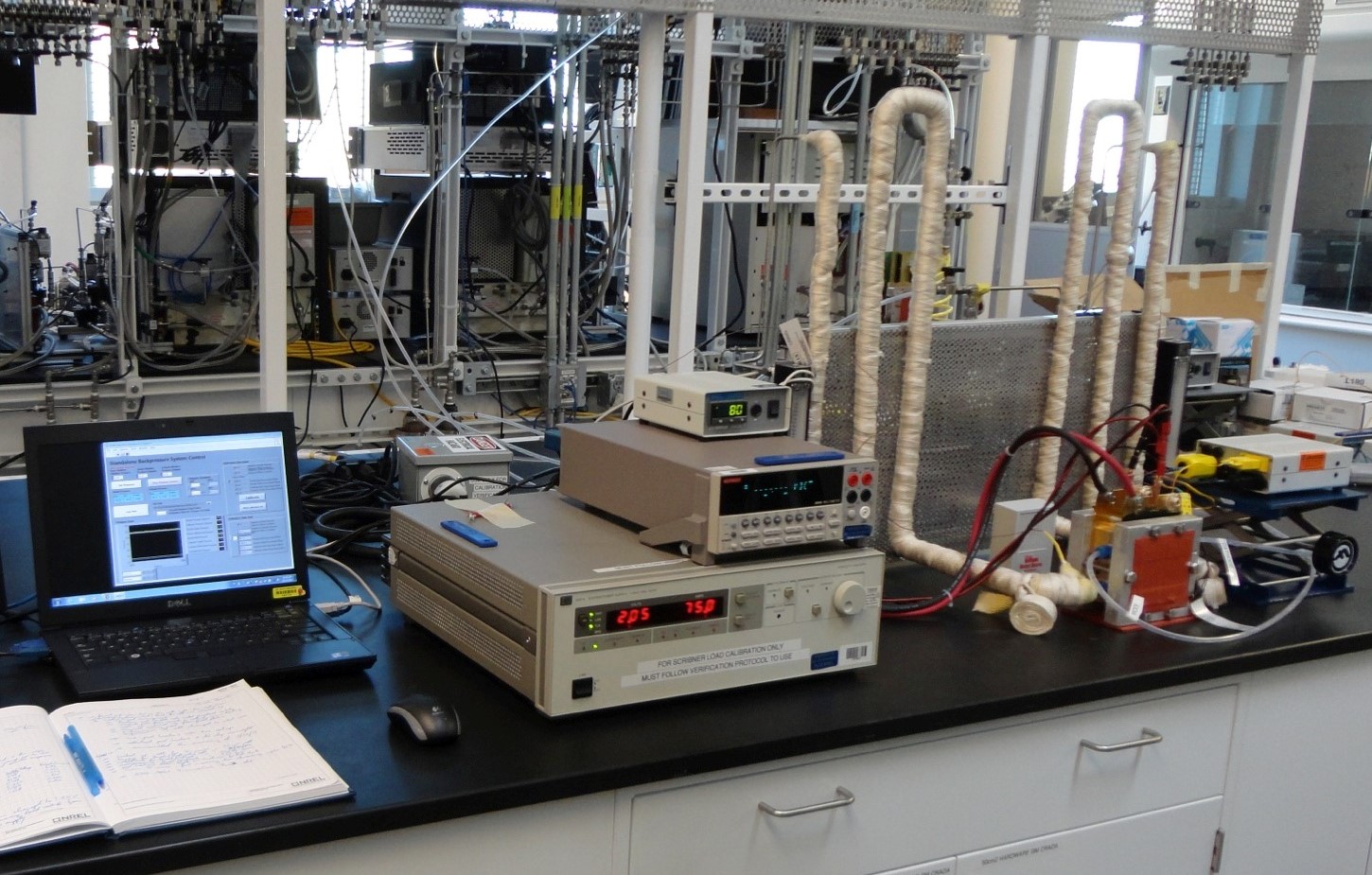